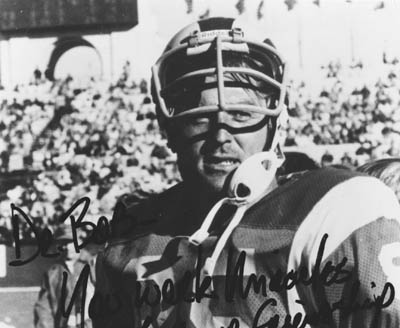 Former Los Angeles Ram star Jack Youngblood earned a reputation in the national Football League as one of the toughest and most talented players of his time. His Punishing hits and defensive presence put him into the NFL's Hall of Fame.

During the latter part of the season in 1984, Youngblood's glorious career came to an abrupt halt when he suffered a potentially career ending back injury. Team doctors diagnosed a ruptured disc in his lower spine, then advised Youngblood that he would need surgery and would never play football again.

Not convinced of this diagnosis, Jack sought treatment from Dr. Robert Moore to alleviate the pain of the injury. A series of adjustments not only reduced the pain, but significantly increased his mobility. As a result of Dr. Moore's treatment, Jack now had hope that he could get back onto the field without the need for surgery.

Before Dr. Moore's care, it was too painful for Jack to even go out onto the field, much less play football. Yet only four days after being told he would never play football again, Jack amazingly had the ability to play the remaining three games in the season, including a pivotal division game against the 49ers with playoff ramifications.

Although a nagging neck injury plagued Olympic athlete Connie Paraskevin-Young in her twenties, her desire to win and respond to physical challenges was motivation to seek treatment from Dr. Moore to alleviate the pain. Representing the united States in speed skating as well as the first women's Olympic track cycling event in Seoul, Korea, Connie's physical pain was engrained in her subconscious throughout her quest for the five gold medals that she would eventually earn over her Olympic career.

Dr. Moore determined her exact problem and prescribed specific upper cervical adjustments to make certain she was 100% physically fit for competition. While cycling, one of the vertebral joints in her neck became immobile, causing a sharp pain when she turned or moved her head.

Even though weekly treatments are not required to meet the rigors of Olympic training, Dr. Moore still monitors Connie's progress today as an active rider. The neck injury that was once considered a big question mark personally and professionally was all but eliminated.